— Democratic Republic of the Congo — 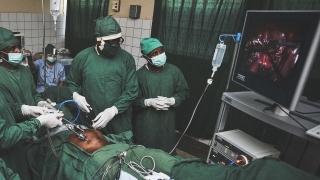 The South Kivu region of the Democratic Republic of the Congo (DRC) has been a conflict zone since 1999. Many armed groups there have been taking violent action against the civilian population with near impunity, particularly women, using rape as a weapon of war. Dr Denis Mukwege, founder of the Panzi Hospital, centrally located in this region, has been dedicating his life to saving women who are victims of these atrocities and denouncing sexual violence.

The Panzi Hospital provides centralised treatment based on a holistic model of a one-stop centre and comprising medical, psychological, socio-economic and legal support. Since its implementation, nearly 50,000 victims of sexual violence have been treated there.

On 6 December 2017, Dr Mukwege presented a proposal to the Fondation Pierre Fabre Board of Directors to replicate his comprehensive model for victim care services at the Bulenga Hospital.

The Bulenga Hospital is 165 kilometres from Panzi in a conflict-stricken area. It has 62 beds and currently treats 1,800 patients a year, but lacks needed human and material resources. Being in a markedly poor region where only a third of inhabitants has access to drinking water, the hospital makes low-cost treatment available to the entire population, offering a specific course of treatment for women who are victims of sexual violence and those suffering the consequences of unmonitored pregnancy (prolapse, obstetric fistulas). The hospital, built on a large section of land that makes future expansion possible, was designed to be autonomous in electricity (solar panels) and drinking water (spring water pumped and distributed via reservoirs and the facility’s own network). Its departments include internal medicine, paediatrics, gynaecology, surgery (simple cases, with others referred to Panzi), a maternity ward, an analysis laboratory and a pharmacy.

On 28 May 2018, a delegation from the Fondation Pierre Fabre travelled to the site and saw first-hand the tremendous need for such a facility, as well as the quality of the treatment structures and the skills of the Panzi and Bulenga staff. Since then, the Foundation’s support has made possible free medical and psychological treatment for women. A victim shelter was also built and the Foundation will provide support for the hospital’s operations.

Ultimately, the expected results include:
– Access to medical and psychological treatment at the Bulenga Centre for victims of sexual violence and other women in need of specialised gynaecological care;
– Patient support for psychosocial reintegration;
– Data collection, compilation and storage on treated patients;
– Patient access to legal aid at the Panzi legal clinic.

Discover below the report made at the Bulenga hospital :

Democratic Republic of the Congo-Kinshasa

1
shelter was built for victims

At the end of these two years of funding, the Fondation Pierre Fabre will conduct a mission assessment to determine how to make this structure sustainable over the long term.

To provide medical care to women in Bulenga, I asked for assistance from the Fondation Pierre Fabre, well-known for its medical work and support of many initiatives to improve access to health care. I am delighted to be receiving the Foundation’s aid.”

The Fondation Pierre Fabre will fund all activities related to providing medical care to the victims at this hospital for the next two years and will work with Dr Mukwege’s team to assess how this structure can be sustained.