The South Kivu region in the Democratic Republic of Congo (DRC) has been a conflict zone since 1999, where many armed groups are employing violent tactics with near impunity against the civilian population, particularly against women, using rape as a weapon of war. Dr Denis Mukwege, the founder of a centrally located hospital in this region, has devoted his life to saving female victims and denouncing sexual violence. The Fondation Pierre Fabre is going to support his work. 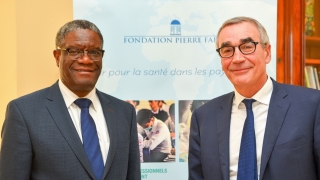 “The man who repairs women”

A militant activist for women’s rights and the eradication of rape as a weapon of war, Dr Mukwege has received a plethora of international awards, including the United Nations Prize in the Field of Human Rights, the 2013 Fondation Chirac Prize for Conflict Prevention and the European Parliament’s Sakharov Prize for Freedom of Thought.

Replicating the Panzi treatment model in a rural hospital in Bulenga

On 6 December 2017, before the Fondation Pierre Fabre Board of Directors, Dr Mukwege presented a project to replicate his model for comprehensive victim care at the hospital in Bulenga. This facility, located 165 kilometres from Panzi in another area affected by the conflict, has 62 beds and currently sees 1,800 patients a year, but lacks the human and material resources it needs. The Fondation Pierre Fabre will fund all activities related to providing medical care to the victims at this hospital for the next two years and will work with Dr Mukwege’s team to assess how this structure can be sustained.

The Fondation Pierre Fabre is proud to support the work of Dr Denis Mukwege in his daily fight to care for these female victims of violence. This project is another way in which the Foundation is taking action in accordance with its mission, which includes improving access to healthcare for populations embroiled in serious crises.