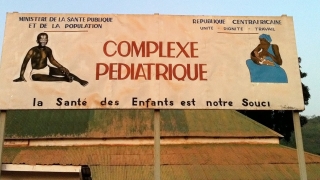 In 2011, pursuing the work already begun in Mali, Fondation Pierre Fabre became involved in the battle against sickle cell disease in the CAR. This country has a record rate of this illness, affecting 2% of infants, but also has very poor overall state of affairs in human health: the life expectancy, just 45 years, is ten years below the African average.

The Foundation focused its attention on the Bangui paediatric complex, an establishment created in 1988 providing care to those ages 0 to18 and the country’s sole modern paediatric healthcare facility. With the Foundation’s support, it would receive new equipment and supplies to improve patient reception, provide staff with increased knowledge of sickle cell disease (through cross-training with Bamako and Kinshasa), set up screening campaigns and raise public awareness of the disease.

Unfortunately, in 2013, when the Foundation had already provided the planned materials and completed its contribution to healthcare worker training, civil war broke out. The humanitarian emergency gradually took precedence over the targeted programmes and the Foundation had to accept the necessity of suspending its interventions there. It hopes to resume activities as soon as possible.