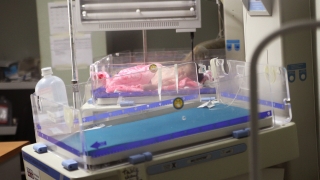 Sickle cell disease is less common in the Caribbean than in Africa. It is also more effectively managed there, particularly in the French overseas territories. Nevertheless, some inequalities remain, as some islands, such as Dominica and Haiti, face greater disadvantages than others. To compensate for this imbalance, Caribbean clinicians and researchers joined forces to create the Carest network in 2011.

Fondation Pierre Fabre wished to support this effort, especially in Haiti: the prevalence of sickle cell syndrome on the island was reported to be 0.7% of births, but there was no dedicated policy, no prophylaxis use, and no appropriate vaccination. The priority there was fighting AIDS, tuberculosis and malnutrition.

In cooperation with Carest, the Foundation unveiled its initial operation in 2014, studying the feasibility of a treatment and management programme for sickle cell disease in Haiti.This initially entailed remedying the island’s dearth of epidemiological data through a neonatal screening pilot project implemented in three local hospitals. For this plan, the Foundation financed health personnel training in sampling techniques (with analyses performed in Guadeloupe). The operation also included improving patient care by training paediatric nurses and clinicians, as well as drafting a standard protocol. Lastly, a number of tools were developed to inform patients, their families and the general public about the disease.

After an exploratory mission by Fondation Pierre Fabre, operations began the second half of 2014. The long-term objective is to sensitise governments to the benefits of a national programme combatting sickle cell disease, and having a viable and adaptable disease management model.

patients enrolled in the group

In 2021, the Foundation is studying the continuation of this project in order to strengthen and consolidate the actions implemented since 2018 and to support a structure that ensures the provision of quality healthcare to very deprived populations.

In 2013, the University Gaston Berger began an operational study of neonatal screening and early treatment of sickle cell disease. The Foundation has joined forces with this effort.