Operating a Mobile Medical Unit on the Lebanese-Syrian border 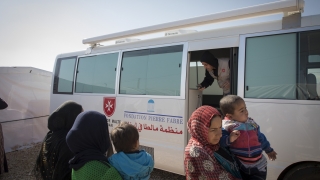 The Fondation Pierre Fabre has been supporting the Khaldieh Medical Centre in Lebanon, in partnership with the Order of Malta, since 2002. The Foundation’s commitment to the Middle East is an extension of the personal initiative of Pierre Fabre, who first began providing this aid after the Lebanon war.

In addition to faithfully pursuing Mr Fabre’s initial commitment, the Fondation Pierre Fabre has elected to increase its support to Lebanon in view of the country’s current circumstances. Sharing 375 kilometres of border with neighbouring Syria, Lebanon is currently seeing a record influx of refugees due to the Syrian conflict: in July 2015, there were 1.2 million refugees for a country of four million inhabitants. This situation creates substantial disparities, particularly in terms of health issues. Having been contacted by the Order of Malta, the Fondation Pierre Fabre funded a special endowment to purchase medicines for the Kefraya Socio-Medical Centre in the Beqaa region.

With more than 400,000 Syrian refugees living in this border zone, the vast majority of them women and children, access to healthcare has become a humanitarian emergency.

In response to this crisis, the Fondation Pierre Fabre and the Order of Malta Lebanon are joining forces to create a Mobile Medical Unit that provides medical assistance to Syrian refugees and the local population. The partnership ensures the financing of the mobile unit (purchase of a bus, conversion of the interior, supply of equipment and medicines) and two years of operation (financing a medical team of two doctors, a nurse and a social worker).

The mobile medical team began work in the spring of 2016 and is expected to handle up to 1,200 consultations per month. Its services are designed not only for refugees, but also for local Lebanese populations, who sometimes find themselves in conditions nearly as difficult as what refugees experience. In addition to medical visits and delivering medicines (free of charge for those who cannot pay), patients needing further care can be transferred to the Kefraya Medical Centre or to an area hospital.

By pursuing this initiative, the Foundation is satisfying one of its statutory missions: to give those plunged into severe crisis by political or economic upheaval and/or natural disaster sufficient access to quality healthcare.

See the February 2017 report from the field:

80%
consultations for the benefit of refugees

In response to the crisis in Lebanon, the Foundation has been extending its support since 2020 to all the health structures of the Lebanese Association of the Knights of Malta, i.e. 9 primary health centres and mobile clinics.

We have already had another Mobile Medical Unit carry out successful operations in the north of the country since late 2014. We can therefore rely on skills and experience transfer. This one primarily serves refugees, but also helps the host Lebanese populations living in this poor region.

Support for the Khaldieh medical-social centre

Since 2002, Fondation Pierre Fabre makes a commitment in the Lebanon, for the benefit of the medical and social center of Khaldieh.

The Global South eHealth Observatory, a Fondation Pierre Fabre initiative, is designed to identify, document, promote and help develop eHealth initiatives that improve access to quality healthcare and medicines for the most disadvantaged populations in ressource-limited countries.

Publication of the book “Nengo, a fight for dignity”

We are pleased to announce the release of the book "Nengo, a fight for dignity" by Editions Privat.