Skin cancer prevention and treatment in people with albinism 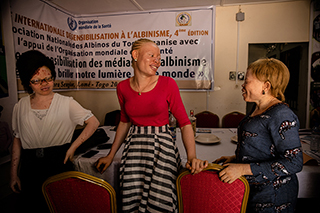 In Togo, where there are only 16 dermatologists to treat a population of 7.6 million, the supply of quality care is extremely limited. Treating people with albinism suffering from skin conditions remains a major challenge, especially in rural areas.

The programme begun in 2019, in partnership with the National Association of Togolese Albinos (ANAT) and the Togolese Society of Dermatology and Sexually Transmitted Infections (SOTODERM), is scheduled to continue for three years and encompass 600 people with albinism in 10 cities in the country’s five regions.

Raise awareness about albinism and its consequences

Twenty people with albinism (two per city) are trained by the ANAT and work to raise awareness about the harmful effects of the sun’s rays and how people should protect themselves from sun exposure. During these educational sessions (12 per city), jars of locally produced sunscreen and hats will be distributed. The project will have local ANAT members producing 6,000 jars of sunscreen over a three-year period, to supply each person with six jars per year. The facilitators of these sessions also increase public awareness about albinism to reduce discrimination and violence against people with this condition. This outreach is further backed by a television documentary, radio broadcasts, posters, 4,000 educational brochures for people with albinism and 4,000 flyers for the general public.

In addition to the awareness-raising sessions, five campaigns using free mobile clinics for 25 days each will be carried out over three years. Six hundred people with albinism will be seen and monitored during these campaigns. A medical network will make it possible to refer 220 patients requiring intervention to the two teaching hospitals (CHU) in Lomé and the regional hospital complex (CHR) in Kara for the northern regions (110 for slight lesions/110 for complex lesions). The project will oversee transportation for these people plus a companion for each.

5 regions
Coverage of every region in the country

SOTODERM is a scientific, apolitical, independent and not-for-profit association. It is an association governed by Law No. 40 184 of 1 July 1901 and the Decree of 16 August 1901. It is of limited duration.

The association’s mission is to help improve skin health and the treatment of sexually transmitted infections and HIV/AIDS infection (STIs/HIV/AIDS).

Its objectives are to:

The National Association of Togolese Albinos (ANAT) is a humanitarian body dedicated exclusively to protecting and promoting the rights of people with albinism (PAA) in Togo. It was established on 3 March 2012 and designated a developmental NGO in August 2017. The registered offices are in Lomé. ANAT’s vision is to “create a Togo in which all persons with albinism enjoy moral, physical, social and economic well-being and participate fully in the country’s development.”

Preventing skin cancers due to albinism

Prevention and early management of skin cancer for people with albinism