Upgrading of the Faculty of Phnom Penh 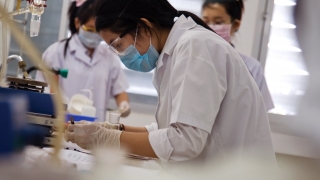 In the 1990s, after decades of civil war and the Khmer Rouge regime, the Cambodian health system had been left devastated. Most of the infrastructure had been destroyed and doctors and pharmacists were sorely lacking. To help the country recover, international aid poured in.

This was the context in which Fondation Pierre Fabre, alongside the Fondation Mérieux, chose to finance and oversee construction of the Faculty of Pharmacy of Phnom Penh. Between 2001 and 2003, a fully equipped, 2200m² building took shape on the campus of the University of Health Sciences, near the medical and dentistry schools, the Institut Pasteur, the Institut du Coeur, and the Calmette Hospital.

Soon, however, the Foundation began concentrating on the project’s central issue: training. Together with Professor Jean Cros, Cambodian teachers and academics from Marseille, the Foundation revamped the pharmaceutical curricula to better meet local public health needs. A doctoral training programme was also established, leading to the graduate degree (DES) in medications. Further, as a true school needed to be able to perform research, a lab opened in 2005. Having a phytochemistry focus, the lab is managed with the Pierre Fabre Research Institute. At the same time, the Foundation subsidised and organised teaching assignments to educate students and train trainers. Scholarships made it possible for the brightest students to specialise and move toward teaching or research.

The Faculty of Phnom Penh now had its own teaching staff and welcomes one hundred students per class. Such autonomy meant Fondation Pierre Fabre ended its involvement in 2007. Nevertheless, the adventure continues through the Master Mekong Pharma offered with the Faculty’s collaboration since 2012.

The Pierre Fabre Foundation played a vital role in transforming what was merely a pharmacy school into a true university faculty. Moreover, every effort was made to help the establishment move forward under its own power as quickly as possible. Now it must go further, such as gaining international recognition within the ASEAN and beyond.”

15
doctors of pharmacy pursued their doctoral studies in France between 2002 and 2006, including five who received a Foundation scholarship 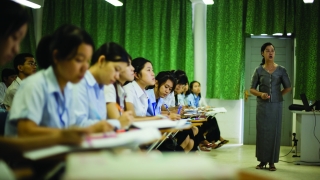 3,000
hours of coursework and instruction provided by French teachers between 2002 and 2006 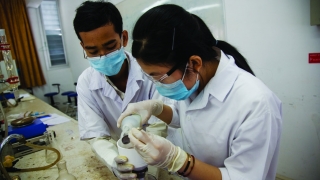 Fondation Pierre Fabre has extended this programme by way of the Master Mekong Pharma: the first class of eleven Cambodian students graduated in 2014.

It is also maintains close ties with all the teachers-researchers it supported during their training. Though the Foundation does occasionally provide them with assistance in the face of certain challenges, it views them as true partners and members of the international scientific community.

To increase the number of drug specialists in Southeast Asia, Fondation Pierre Fabre created the Master Mekong Pharma, a Masters of Pharmaceutical Sciences programme. The first class was recruited in 2012.

Rehabilitation of the Vientiane Faculty of Pharmacy

An initial partnership agreement was signed on 10 May 2005 and the Foundation embarked on the project with a threefold challenge before it: to fully satisfy the request, but, more importantly, to rally local youth around this renaissance and give the institution wings to fly on its own.