» Lebanon – Introducing a Mobile Medical Unit in the Beqaa Valley

Lebanon – Introducing a Mobile Medical Unit in the Beqaa Valley

Lebanon – Introducing a Mobile Medical Unit in the Beqaa Valley

In partnership with the Order of Malta, this Mobile Medical Unit (MMU) is designed to provide medical assistance to Syrian refugees and the local population.

A ceremony, attended by Lebanon’s Minister of Health, was held on Saturday, 9 July, to celebrate the unveiling. 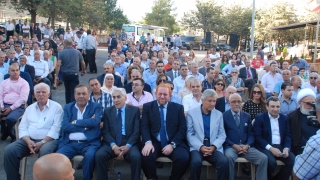 The Beqaa Valley, a rural area of ​​Lebanon near the border with Syria, has been facing a heavy influx of refugees fleeing the war in Syria: more than 400,000 Syrians have moved into scattered settlements and have little or no access to basic healthcare.

The Order of Malta and the Fondation Pierre Fabre have teamed up to assist this population through creation of a Mobile Medical Unit: a 30-seat bus converted into consultation and treatment rooms that will travel to the largest villages in West Beqaa. The unit’s staff, composed of two doctors, a nurse and a social worker, will be able to provide up to 1,200 consultations per month.

In the presence of Lebanon’s Minister of Public Health, Mr Waël Bou Faour, the ceremony was held in the courtyard of the Kherbet Kanafar government hospital, where patients requiring further examination or hospital care will be referred. The Kefraya Health Centre, managed by the Order of Malta, will also serve as a key referral facility once renovation work has been completed there.

The event, held under the banner of the Ministry of Public Health, drew many political, municipal and religious figures, as well as U.N. representatives and a number of the region’s hospital directors. 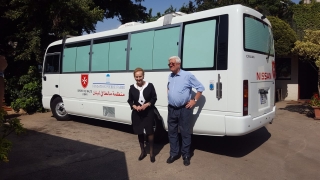 The MMU with HSH the Princess de Bourbon Lobkowicz and Charles-Henri d’Aragon, Ambassador of the Order of Malta in Lebanon

A humanitarian necessity
Mr Marwan Sehnaoui, President of the Order of Malta Foundation for Lebanon, and Lebanon’s Minister of Public Health both spoke at the ceremony.

Mr Sehnaoui emphasised the humanitarian aspect of the broader work undertaken by the Order of Malta in Lebanon as concerns its many components and communities. He stressed the non-political and strictly humanitarian message of this work, stating that, in practice, it aided the disadvantaged, whether Syrian or Lebanese. In conclusion, he revisited the history of the MMUs operated by the Order of Malta since 2006, first in northern Lebanon and now in the Beqaa Valley. That initiative would not have been possible, either in terms of the original investment or the current operating costs, had it not been for the support of the Fondation Pierre Fabre

Minister Waël Bou Faour began his speech by thanking all concerned for commissioning this MMU, which will help, at least in part, to ease the burden of the humanitarian aid that must be borne by Lebanon in helping Syrian refugees and the country’s poor populations. He issued a fervent appeal to the Lebanese government as regards these Syrian refugees, words that were carried in the press: “The matter of displaced Syrians is a heavy burden for Lebanon, one the country has endured beyond its capacity. The State must adopt a cohesive, unifying national policy, as we cannot have a denominational, sectarian or local approach to these displaced Syrians without risking the collapse of the Lebanese-Syrian context.”

The two leaders later joined the crowd and set off to see the MMU, which they each visited in turn with key political and religious leaders in attendance.