On Friday, 24 October, the Hanoi University of Pharmacy held an onsite graduation ceremony for the first Master Mekong Pharma class. 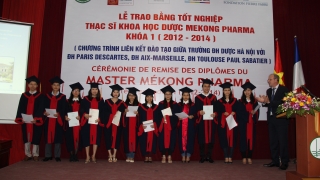 The ceremony was attended by the University management and faculty, representatives of the Vietnamese Ministry of Health, Fondation Pierre Fabre, the University Paris Descartes, the AUF and the French Embassy. It was a moving and exciting moment for everyone involved. The event was the culmination of several years’work in designing and implementing the Master Mekong Pharma, an original and transnational training programme joining the forces of three Asian universities and three French universities.

Mr Alain Dorie, representing the Ambassador of France, personally handed each student his or her diploma. The ceremony concluded with words from Miss Nguyen Thi Hong Van, the class’ delegated spokesperson. She thanked all the partners of this innovative training opportunity and told of the agreement developed between the 29 students of the first graduating class, made up of three nationalities – Vietnamese, Cambodian and Laotian: “Instead of competing with one another, we have chosen to stand together and make progress as one.”