The first version of a revolutionary new open-source ultrasound technology was unveiled on Thursday 24 March at the Hôtel-Dieu hospital in Paris.

The prototype was developed by EchOpen, and could revolutionise access to healthcare by simplifying the diagnosis procedure for patients while opening up new opportunities for doctors. 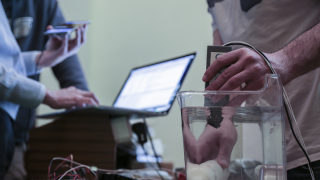 For more than a year, the EchOpen community have been developing a revolutionary low-cost, open-source ultrasound stethoscope, which connects to a smartphone or tablet. On 24 March 2016, on the bicentenary of Laennec’s invention of the stethoscope, EchOpen hosted an evening presentation in a lecture theatre at the Hôtel-Dieu hospital in Paris, to unveil the first version of its prototype. Many people from the worlds of health and technology gathered to learn about this future stethoscope of the 21st century.

Following a presentation of how the community operates, and the collaborative philosophy that has driven the project, members of EchOpen demonstrated the system. This open-source ultrasound stethoscope is easy to use, and will produce ultrasound and doppler imagery for a full range of examinations (gynaecological, vascular, muscular-skeletal, mammary, cervical, etc.). The imagery obtained can then be shared virtually in order to obtain specialist diagnostic assistance.

Major changes in access to healthcare
By improving access to medical imaging and telemedicine, this disruptive technology will totally change the direction of diagnosis, in city-centre emergency services as well as in regions lacking healthcare provision. The system can be used by practitioners in cities and hospitals or in “medical deserts”, and will help save many lives in countries in both northern and southern hemispheres. The Fondation Pierre Fabre is supporting this project, which will help solve some of the problems faced by southern countries in terms of access to healthcare.

The EchOpen project: a new way of working
The development of the ultrasound stethoscope through open-source hardware has mobilised a multidisciplinary community of volunteers, brought together by the EchOpen non-profit organisation, social networks, and the many initiatives supporting decentralised development. Today, led by a core group of experts from a range of backgrounds, more than 200 people are involved in the project and community, united by the aim of making ultrasound medical imaging technologies accessible, open and collaborative.

The launching event in images