» Senegal – Opening of the CERPAD in Saint-Louis

Senegal – Opening of the CERPAD in Saint-Louis

Senegal – Opening of the CERPAD in Saint-Louis

The Centre for Sickle Cell Disease Research and Outpatient Treatment (CERPAD) provides an innovative model for screening and early treatment of children with sickle cell disease.

The CERPAD, an extension of the Gaston Berger University in Saint-Louis, Senegal, officially opened on 10 December in the presence of the Fondation Pierre Fabre. 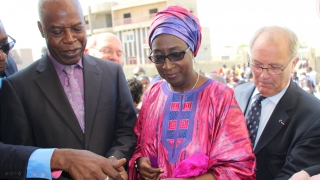 Since 2013, the Fondation Pierre Fabre has been collaborating with Gaston Berger University (UGB) in Saint-Louis, Senegal, to implement an operational study on screening and early treatment of sickle cell disease. Led by Professor Ibrahima Diagne, Director of the university’s Faculty of Health Sciences and “SCD liaison” (coordinator) at Senegal’s Ministry of Health, this study innovatively combines care and research. It is designed to measure the advantages of screening and early treatment of newborns. It will facilitate development of an innovative model to be presented to the Senegalese health authorities, so that neonatal screening for sickle cell disease will be consistently performed in Senegal.

This study, based on analyses of epidemiological, clinical and socio-anthropological data and other information, relies heavily on collaboration with research teams from other UGB departments (applied science and technology, sociology and anthropology).

An ambitious project
Making this project a reality required forming a dedicated structure within the university. As part of its collaboration with the UGB, the Fondation Pierre Fabre fully funded the construction and equipping of a 1500m2 building, home to an analysis laboratory and rooms for medical visits and day hospitalisation for affected children. Each year, the building will be able to accommodate the children diagnosed with sickle cell disease from among 6,000 infants in the maternity ward of the Saint-Louis regional hospital and reference healthcare centre (Centre de Santé de reference) to be screened at birth. A first in West Africa, and an example of a successful public-private partnership.

Committed partners
The ribbon-cutting at the building took place on 10 December in the presence of the project partners: Professor Ibrahima Diagne, Director of the university’s Faculty of Health Sciences, Dr Marie Ka Cissé, head of the Division of Chronic Non-Communicable Diseases at the Ministry of Health (representing the Minister), Professor Mamadou Sangharé, Director of Senegalese Higher Education (representing the Minister of Higher Education and Research), Magueye Ndiaye, President of the Senegalese Association to Combat Sickle Cell Disease, Dr Jean-Pierre Lamarque, Regional Health Advisor in West Africa, representing the Ambassador of France, and Jacques Godfrain, Béatrice Garrette and Véronique Teyssié, the Treasurer, Director General and Project Manager, respectively, for the Fondation Pierre Fabre.

In the coming weeks, training in the diagnosis and the treatment of sickle cell disease will be offered to healthcare workers in the maternity wards at the Hôpital Saint-Louis and the Saint-Louis reference healthcare centre. The first screenings could begin as early as March 2016.

The inauguration in pictures