» Launch of the eHealth Observatory

Launch of the eHealth Observatory

Launch of the eHealth Observatory

On Monday, 4 July 2016 the Fondation Pierre Fabre introduced its eHealth Observatory for Southern countries at its En Doyse headquarters before an international audience.

This international conference, which was live-streamed on the web, was also the moment to reward nine important eHealth initiatives. 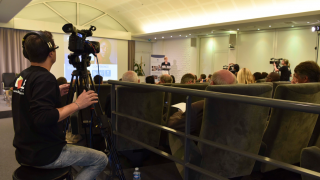 After a year of committed effort, the Fondation Pierre Fabre officially introduced its eHealth Observatory for Southern countries (Observatoire de la e-santé dans les pays du Sud) at an international conference attended by a hundred people from the realms of health, development aid and new technologies. Through a partnership with the Agence Universitaire de la Francophonie (AUF), the conference was live-streamed on the web and watched by 15 digital campuses (Bamako, Dakar, Ouagadougou, Abidjan, Bobo Dioulasso, Lomé, Bujumbura, Kinshasa, Brazzaville, Antananarivo, Réduit (Moka, Mauritius), Hanoi, Danang, Vientiane and Phnom Penh), where students were able to take part in discussions via videoconferencing.

Nearly 600 people also watched the conference live on the internet.

Over the course of the day, the Fondation Pierre Fabre unveiled the origins, objectives and results of the eHealth Observatory for Southern countries, available on the website www.odess.io. The Observatory is meant to identify and document eHealth initiatives, pilot projects or projects under development that have demonstrable positive impact on human health in resource-limited countries, so as to support and streamline their development.

With the guidance of an Expert Committee, which includes Gilles Babinet, Digital Champion for the European Commission, the actual monitoring and information-gathering work was assigned, for a one-year period, to CATEL, the leading telemedicine network in France and francophone Africa, and StartupBRICS, specialising in startups in emerging countries. This will generate an open, evolving, scalable database that currently lists more than 50 eHealth initiatives in Africa, Southeast Asia and India.

Awards to the first initiatives
Nine of the initiatives identified by the Observatory were singled out as being particularly relevant and exemplary. The people behind these initiatives were invited by the Fondation Pierre Fabre to present their achievements at the 4 July conference and each received special prizes from the Foundation: a grant of €10,000 per project, plus the chance to take part in the eHealth Summer University in Castres for three days (5-7 July 2016).

Gilles Babinet closed the gathering by sharing his forward-looking, technophile vision with the audience, addressing a thought-provoking question: “Will emerging countries have better-developed digital health systems than the West?”

For more information on the nine initiatives that received awards at the conference this past 4 July, and to watch videos of the event, visit the www.odess.io website. You will also find other news stories, surveys and updates on the eHealth Observatory for Southern Countries.

Watch the video of the conference