On 22 May, the Foundation held the grant-awarding ceremony for its Call for Regional Projects.

An event to support the dynamic network committed to improving healthcare in the Occitanie region. 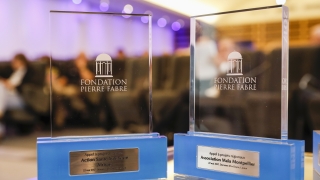 In the presence of the Prefect of the Tarn department and the Mayor of Lavaur, Fondation Pierre Fabre President Pierre-Yves Revol presented grants to the winners of the 2017 Regional Call for Projects.

A longstanding commitment
An important part of the mission of the Fondation Pierre Fabre is to constantly improve healthcare to treat the populations of the planet’s most underprivileged countries, where it partners directly with local entities and works in concert with the relevant governmental bodies (ministries of health and education). But its history, inseparable from that of its founder, also has roots in the Occitanie region. The Foundation therefore is deeply committed to learning about and dialoguing with local actors there – charitable associations, universities, hospitals and research centres –, many of whose members are also committed to helping improve health in the poorest countries.

In addition to implementing its own programmes, the Foundation has always supported NGO projects, especially those of NGOs in this region. Since 2002, the Foundation has given periodic financial assistance to nearly fifty different initiatives, amounts totalling more than €515,000 in funding.

In 2016, for the first time, the Foundation decided to channel this aid through a Call for Regional Projects addressed to associations headquartered in the Occitanie region. To disseminate this appeal, it called upon the Occitanie Coopération network, of which the Fondation Pierre Fabre has been a member for several years and which has provided precious support for this operation.

Grant-eligible projects were required to have missions intended to improve the conditions in which people in the Global South have access to healthcare or medicines and/or to improve healthcare worker skills. To this end, five of the region’s associations were chosen by the Foundation’s Selection Board last year and were awarded grants.

A bumper crop in 2017
In 2017, the Call for Projects was extended to encompass regional institutions (communities, health institutions, universities), and a number of them submitted projects. The result was a bumper crop, with 20 projects received, 13 of which were submitted to the Selection Board for review. Ultimately, seven were selected, each of which will receive funding from the Foundation in accordance with the specificities of their projects.