Under the aegis of the Fondation Chirac, Fondation Pierre Fabre played a key role in organising an international gathering in Cotonou.

At the invitation of Dr Boni Yayi, President of the Republic of Benin, a meeting was held between six serving African Heads of State, the Minister of Health of the Lao People’s Democratic Republic and many other international personalities. 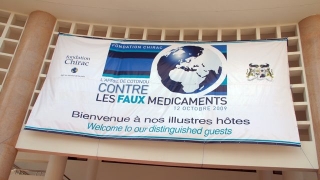 The Cotonou Declaration was intended to raise the alarm about the health, economic and social impact of the scourge of counterfeit medicines. The goal is ultimately to motivate the United Nations to establish an international convention to criminalise this devastating scourge in Southern countries, one that is now also affecting the major Western countries.

Since 12 October 2009, nearly thirty countries have ratified the Cotonou Declaration and several initiatives have fuelled and strengthened international efforts to fight fake drugs. These include a new directive adopted by the European Union in February 2011, which was approved by the European Parliament, reinforcing the tools available in the fight against counterfeit medicines to better protect patients by securing the distribution channels, especially on the internet.