Since July 2016, the Mobile Medical Unit (MMU) set up by the Foundation in partnership with the Order of Malta is operational in Lebanon’s Bekaa Valley.

This mobile unit provides medical assistance to Syrian refugees and the local population. 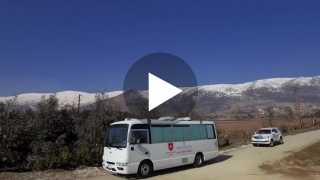 Faced with the heavy influx of refugees in the Bekaa valley near the Syrian border, the Order of Malta and the Fondation Pierre Fabre have teamed up to address the medical needs of these populations. A Mobile Medical Unit roams the villages of Bekaa Valley and proposes consultations thanks to its team: 2 doctors, a nurse, and a social assistant. Six months after its inauguration, over 5000 patients have been taken care of. Among them, 45% are children under 11. The consultations and drug deliveries are free of charge for unprivileged people. For the past few months, 7 patients of the MMU out of 10 were refugees.

See the report about the MMU from February 2017.