» Lebanon – A Mobile Medical Unit on the Syrian border

Lebanon – A Mobile Medical Unit on the Syrian border

Lebanon – A Mobile Medical Unit on the Syrian border

On 3 December, a partnership agreement was signed between the Fondation Pierre Fabre and the Order of Malta in Lebanon to create a mobile medical unit.

The purpose of this partnership is to provide medical assistance to Syrian refugees and the local population. 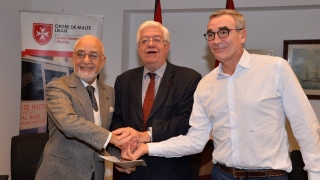 For many months, the Beqaa Valley, a rural area of ​​Lebanon near the border with Syria, has been facing a heavy influx of refugees. More than 400,000 Syrians have moved into this area, the vast majority of them women and children, many with no access to healthcare. The Kefraya Socio-Medical Centre, operated by the Order of Malta in West Beqaa, has opened its doors to refugees, but is ill-equipped to handle the extent of the healthcare needs.

In September 2014, the Order of Malta introduced a pilot Mobile Medical Unit (MMU) project in the Akkar district of northern Lebanon. Following the success of this programme, the Lebanese Ministry of Public Health asked that it be duplicated in the Beqaa region.

1,200 medical visits a month
The mobile medical unit is a 30-seat bus converted into consultation and treatment rooms. It is able to travel to the largest villages in West Beqaa. The unit’s staff, composed of two doctors, a nurse and a social worker, will provide up to 1,200 consultations per month. The services offered by this mobile unit will target not only refugees but the Lebanese population, as well, who are sometimes in conditions nearly as precarious as those of the refugees. Beyond medical visits and medicine delivery (free to those unable to pay), patients in need can be transferred to the Socio-Medical Centre in Kefraya or to a local hospital.

The Fondation Pierre Fabre decided to invest in this project and has committed to financing the initial investment in the mobile unit, as well as two years of operation (staff, medicines and medical examinations). To this end, on 3 December 2015, a partnership agreement was signed by Pierre-Yves Revol, Chairman of the Fondation Pierre Fabre, Charles-Henri d’Aragon, Ambassador of the Order of Malta in Lebanon and Chairman of the Association Malte Liban, and Marwan Sehnaoui, President of the Order of Malta Foundation for Lebanon. Mr Sehnaoui emphasised that this partnership, based on the common values ​​shared by its signatories, was essential for both the Order of Malta and Lebanon.