» Symposium – The importance of training pharmacists…

Symposium – The importance of training pharmacists…

Symposium – The importance of training pharmacists…

On 3 October 2013, a year after the start of the Master Mekong Pharma, Fondation Pierre Fabre held a symposium.

A symposium that served to present its work regarding the training of pharmacists in developing countries. 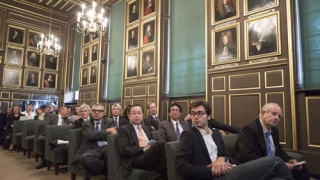 This symposium was held in the Salle des Actes of the Paris-Descartes Faculty of Pharmacy, a partner of the Master programme.

After a review of the missions and initiatives of Fondation Pierre Fabre presented by Béatrice Garrette, Director General, and a tribute to Pierre Fabre by Dean Jean-Michel Scherrmann, the speakers (listed above) presented their analyses of the training needs for drug professionals in the Southern countries. Professor Jean Cros then outlined the history, organisation and objectives of the Master. This training programme takes place over two years: the first common year serves to harmonise and consolidate the students’ knowledge in the fields of pharmacology and pharmaceutical chemistry, while the second year corresponds to the French masters coursework (delocalised) in “Quality assurance and quality control of healthcare products”, “Pharmacokinetics” and “Pharmaceuticals and Public Health”.

Three Master students – Vietnamese, Cambodian and Laotian – shared impressions of their experiences and their future plans. The symposium ended with a discussion opened to the audience, which included key figures from the pharmaceutical world, academics, members of the Academies of Pharmacy and Medicine, representatives of various public authorities, NGOs and embassies of partner countries.

The Master Mekong Pharma is a two-year post-graduate training course recognised both in France and abroad. It has been instigated, coordinated and supported by Fondation Pierre Fabre with the objective of training high-level specialists and research professors in the field of drug sciences in three Southeast Asian countries: Vietnam, Cambodia and Laos. It enjoys the support of the Agence universitaire de la francophonie and the Coopération française. The faculties of Hanoi (Vietnam), Vientiane (Laos) and Phnom Penh (Cambodia) are associated with the French universities of Paris-Descartes, Toulouse and Aix-Marseille, respectively.

Classes are taught in French in the three Asian countries by volunteer instructors from French partner universities. Fondation Pierre Fabre has committed to supporting the first three graduating classes for this Master.