The Fondation Pierre Fabre hosted its fourth annual conference at Lavaur, on 3 October 2017, on the Universal Healthcare Coverage in Africa: achievements, challenges and prospects. 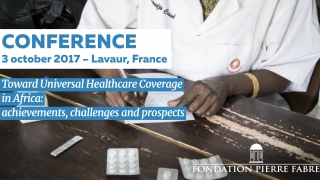 The health ministers of 47 African states, meeting in Zimbabwe on 30 August for the 67th Session of the WHO Regional Committee for Africa, have adopted a range of actions intended to strengthen health systems in their countries and eventually lead to Universal Health Coverage (UHC).[1]

Earlier, in May 2017, Dr Tedros Adhanom Ghebreyesus, upon his election as WHO Director-General, declared: “Achieving universal health coverage will be my top priority, because I believe it is the best overall investment in health we can make. Where health systems are strong, we are better able to prevent, monitor, detect, and respond to health emergencies. At the same time, universal health coverage delivers disease prevention, health promotion, and treatment for communicable and non-communicable diseases alike, while ensuring individuals are not driven into poverty because of high costs.”

Against this backdrop of diverse commitments made by the international community and the African states themselves, the Fondation Pierre Fabre decided to host a day of dialogue and focused work on this issue at its fourth annual conference to be held on 3 October 2017. The objective of this year’s conference was to assess available knowledge pools, general awareness, and other diverse issues related to universal health coverage in the African context, such as healthcare quality, financing issues and development of mutual health insurance schemes.

Speakers included representatives of health insurance funds in African countries, along with academics, economists and anthropologists. The conference was moderated by Elé Asu, journalist. Host of “Réussite”, a current-affairs programme on French television devoted to the African economy/News anchor (Canal+) – ‎Canal+ Afrique.