On 15 June, Cameroon’s Ministry of Public Health officially began it activities within the healthcare and social services platform for people with sickle cell disease, in partnership with the IECD and Fondation Pierre Fabre, with co-financing from the AFD.

Following the Democratic Republic of Congo and Madagascar, Cameroon became the third country to join this platform, designed to improve knowledge-sharing about the disease. 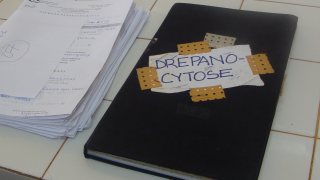 A step forward in the fight against sickle cell disease
Cameroon has officially begun its activities within the health and social services platform helping people with sickle cell disease in Central Africa and Madagascar; Cameroon is also about to start the first screenings in maternity wards of three Yaoundé healthcare facilities.

Samples taken from newborns will be analysed at Cameroon’s Pasteur Centre, a project partner specifically equipped for this work with an isoelectric focusing (IEF) analyser adapted to perform analyses on infant haemoglobin.

In addition to neonatal screening and improving patient care by training or retraining healthcare personnel, the programme includes an education and outreach component for local communities and the general public. In keeping with this intention, events have been organised in Yaoundé, in partnership with the Ministry of Public Health, to celebrate the World Sickle Cell Day on Friday, 19 June.

Ultimately, 12,000 newborns in Cameroon will be tested, 600 patients will be monitored at seven establishments in Yaoundé and Douala and 200 health workers will be trained in caring for sickle cell patients.

United against the disease
At a ceremony held in Cameroon’s Pasteur Centre on Monday, on 15 June 2015, the commencement of the Cameroonian component was formalised by the signing of the partnership agreement between the project stakeholders in Cameroon: IECD, Fondation Pierre Fabre, the Pasteur Centre of Cameroon and the GEDREPACAM. 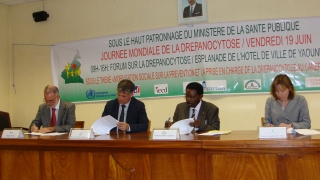 Many key figures were at the ceremony, including Mr André Mama Fouda, the Cameroonian Minister of Public Health, Ms Caroline Comiti, the French Embassy’s Regional Advisor in Health Cooperation, and Mr Hervé Conan, Director of the AFD office in Cameroon. The event took place before the opening session of the first workshop organised by REDAC (Sickle Cell Disease Research Network in Central Africa).

Further empowering the REDAC is one component of the programme, to facilitate knowledge sharing between its members and promote more effective advocacy to authorities and international agencies, such as the WHO.