On 13 September 2016, a secondary information and sickle-cell treatment centre opened in Bobo-Dioulasso.

The Fondation Pierre Fabre’s support in creating this secondary centre is part of its commitment to the Sickle Cell Disease Initiative Committee in Burkina. 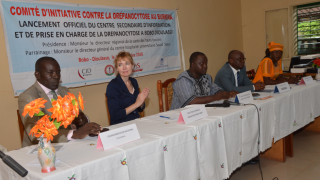 Housed in the Regional Blood Transfusion Centre (CRTS) in space provided by the Direction Régionale de la Santé des Hauts-Bassin and the Bobo-Dioulasso  (CRTS?), the secondary information and sickle-cell treatment centre boasts a consultation office for the medical consultant, a treatment room for the nurse and a small day hospital ultimately able to accommodate as many as five patients. There is also an area where the regional branch of the CID/B can receive patients and their families.

Decentralised treatment for improved care
The Fondation Pierre Fabre emphasised the wise decision to rely on an existing structure (the Sourô Sanon teaching hospital) for screening and treating diagnosed children, as well as the proximity of the Regional Blood Transfusion Centre, where sickle-cell patients regularly undergo transfusion or exchange transfusion. This achievement is also the first step in bringing treatment options closer to ailing individuals living outside the capital.

In parallel with this opening, the CID/B held a two-day training session for midwives from Bobo-Dioulasso’s healthcare facilities (teaching hospital and health and social promotion centres, known as CSPS). During the training session, results were released of testing done at the Sourô Sanon facilities since April 2016: from the 2,043 births registered between April and August 2016, 1,579 samples were taken (a coverage rate of 74%), detecting 19 children with sickle-cell disease. Organisers again emphasised that the programme’s purpose was to help establish systematic screening across the country, based on results from select maternity facilities, which will provide impetus to efforts to gain the attention and support of Burkina Faso’s healthcare authorities.

A strong partnership
The Fondation Pierre Fabre has supported the CID/B since September 2014 as part of a partnership centred on three components:

The opening in pictures