On 3 October, the Nobel Committee announced that it was awarding the 2018 Nobel Peace Prize to Congolese surgeon and gynaecologist Denis Mukwege. The Fondation Pierre Fabre, which has supported Dr Mukwege in the Democratic Republic of Congo since 2017, is delighted by this international recognition of his commitment. 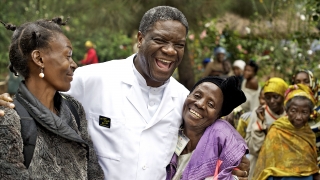 Dr Mukwege, 63, has “dedicated his life to defending victims of sexual violence in wartime,” said the Committee. “He and his team have saved thousands of victims of such assaults.”

Dr Denis Mukwege founded a first hospital in 1999 in Panzi in the South Kivu region, a conflict zone where many armed groups are employing violent tactics with near impunity against the civilian population, particularly against women, using rape as a weapon of war. Dr Mukwege decided to devote his life to them, which is why he is known as “The man who repairs women.” At Panzi Hospital, he created a comprehensive care model for victims, including medical, psychological, socio-economic and legal intervention. Since the hospital opened, it has treated more than 50,000 victims of sexual violence.

On 6 December 2017, before the Fondation Pierre Fabre Board of Directors, Dr Mukwege presented a project to replicate his model for comprehensive victim care at the hospital in Bulenga, 165 kilometres from Panzi. In this hard-to-reach area burdened by extreme poverty, where only a third of the inhabitants has access to drinking water, the hospital provides low-cost care to the entire population, and also has a special programme for women who have been victims of sexual violence and those suffering the consequences of unmonitored pregnancy (prolapse, obstetric fistula). The Foundation’s support will ensure free aid for these women. In May 2018, Foundation Director General Béatrice Garrette visited Panzi and Bulenga to see the extent of the needs to be addressed and the remarkable work done by Dr Mukwege and his staff. The visit also served as an opportunity to officially sign the partnership between all those involved in this programme.

The Fondation Pierre Fabre, via Foundation President Pierre-Yves Revol, sent its warmest congratulations to Dr Mukwege: “We are immensely pleased to see your extraordinary courage and charisma being given the highest honours. You are one of the handful of men and women capable of fighting for humanity both in the field, through day-to-day actions, and across the globe, through tireless testimony. The Fondation Pierre Fabre is tremendously proud to support your fight.”