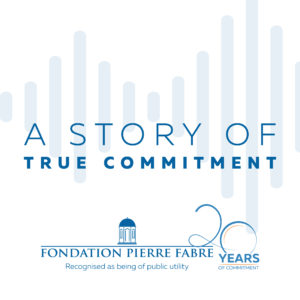 A story of true commitment

As the Fondation Pierre Fabre celebrates its 20th anniversary, it relives its history in podcasts.

The Foundation team, partners and experts take turns at the microphone to lead listeners through two decades of initiatives in the field, helping people in the Global South have better access to quality medicines and health care. Six podcasts to be released between April and September 2019 look back on the Foundation’s origins and its ever-expanding work in key areas of intervention.

In the first episode, Fondation Pierre Fabre Chairman Pierre-Yves Revol and Director General Béatrice Garrette discuss the origins of Pierre Fabre’s commitment and what led this man, two decades ago, to establish a Foundation with a distinctive status in France and an explicit realm of intervention.

“In 1995, counterfeit meningitis vaccines were administered to local populations in Niger during an epidemic of the disease. This was one of the most serious instances of counterfeit drug use, an episode that caused nearly 3,000 deaths. Pierre Fabre was in Niger at this time and personally observed the ineffectiveness of these vaccines. The event drove his decision to devote his energies and resources to reducing the inequities between the Global North and South in access to healthcare and, more specifically, to combat the scourge of counterfeit medicines.”